On the evening of 30th May members of the De Courcey classic and Vintage Club gathered in Ballinadee. Also present were representatives of the following Organisations; The Irish Guide Dogs for the Blind, Courcey Rovers Camogie Club, Ballinadee Development Association and the local Foroige group.

The working day will once again be held on the farm of Paddy and Anne McCarthy in Ballinadee, Bandon. The date for the event is Bank Holiday Monday 1st Aug.

2016 is the 80th anniversary of the start of production of the Ferguson tractor with the Ferguson Brown being manufactured in 1936. One of these rare tractors will be on display in Ballinadee at the event curtesy of Mick Forde of “The Farm” Greneagh, Co Cork. visitthefarm.ie

We will have a large number of Ferguson tractors and Ferguson system implements on show and being demonstrated by their owners. Star attractions will of course be the growing numbers of vintage combines from all over the country that attend this event each year. 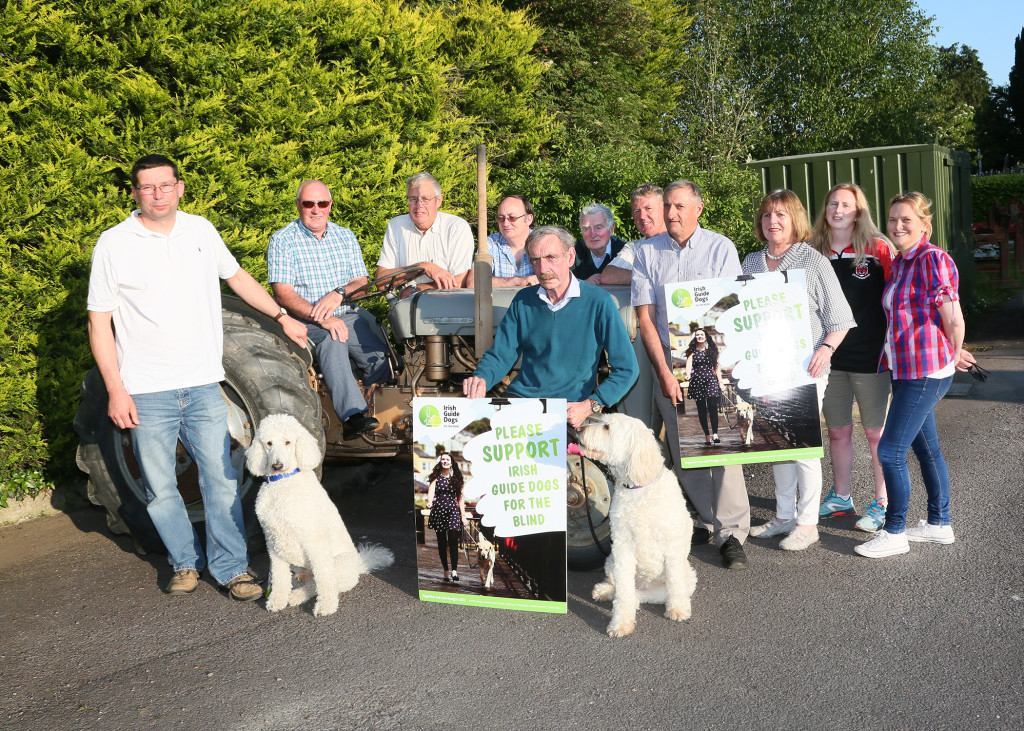 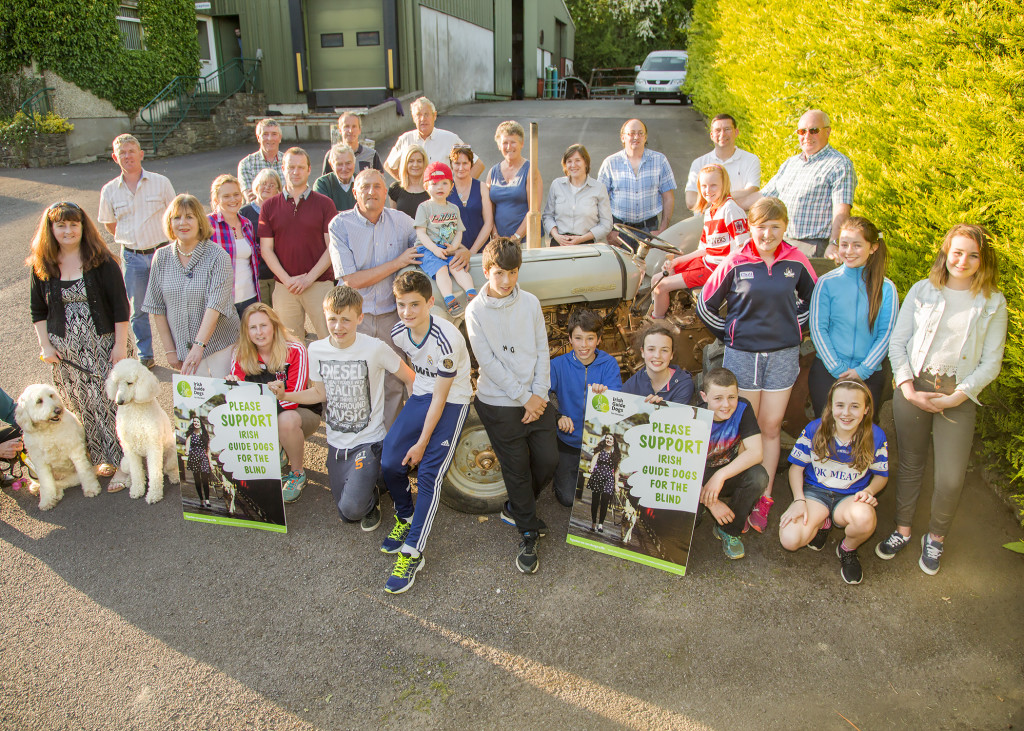 Launch of the De Courcey Harvest Working Day Raffle in aid the Irish Guide Dogs and local Community Groups on Monday 1st August marking the 80th anniversary of the production of the Ferguson Tractor, top prize is a trip to London with Barter Travel, Bandon. Pictured are the Organising Committee and reps from the Irish Guide Dogs and the local Community groups who will benefit from the event. Pic Donie Hurley 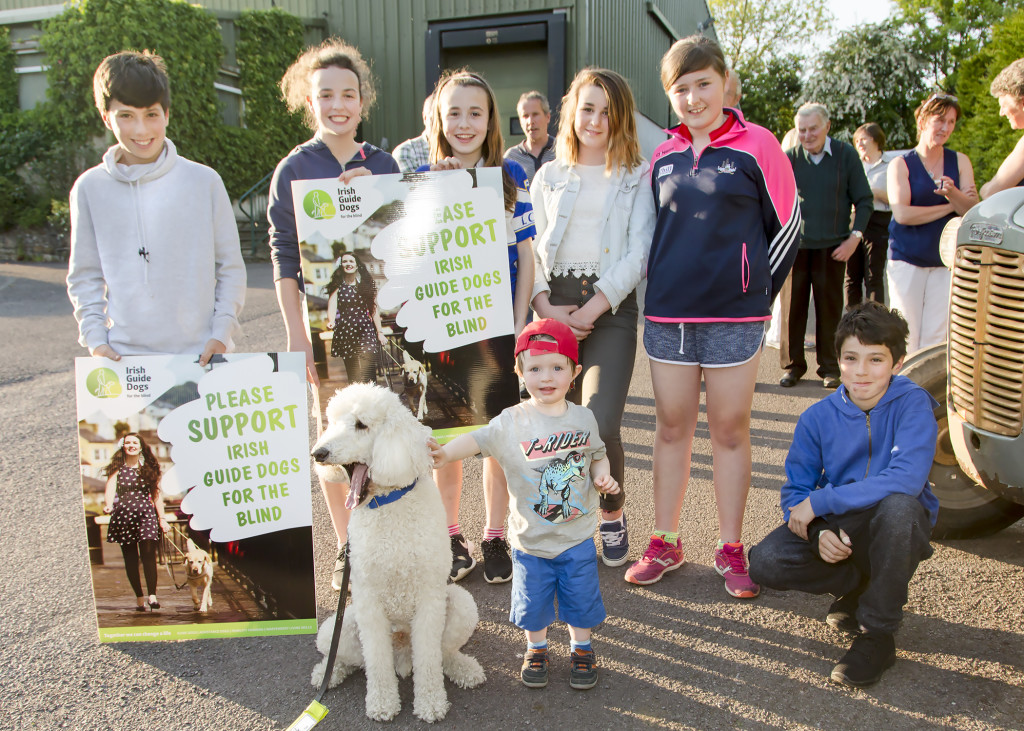 Chairman of De Courcey Classic and Vintage club told how the McCarthy Family, land owners of this years site have a long history associated with Harvesting and Milling.

Members from each group who will benefit from funds raised on the day also said a few words. 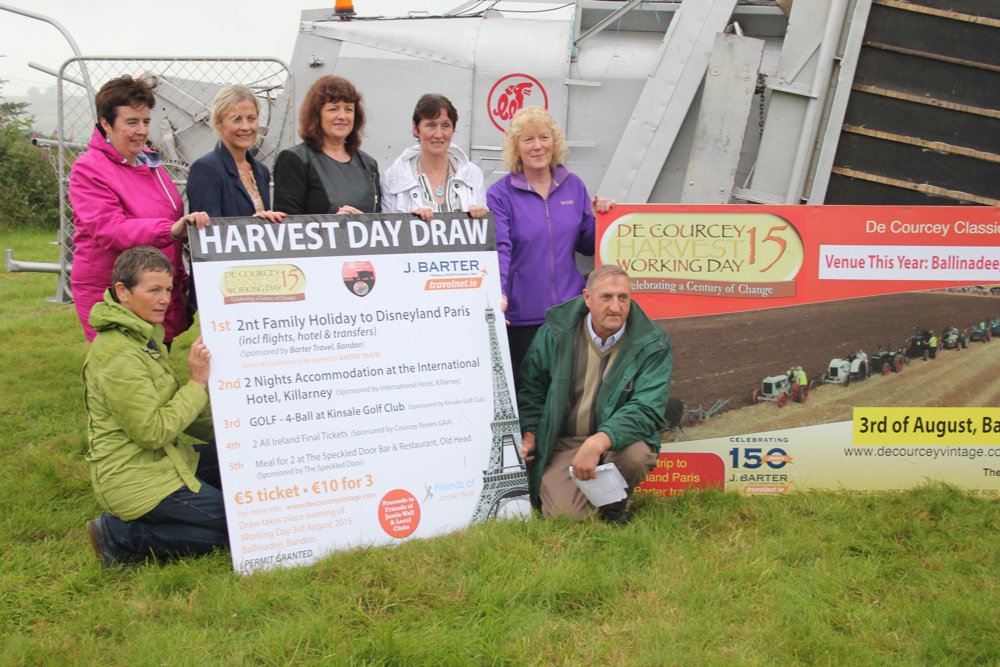 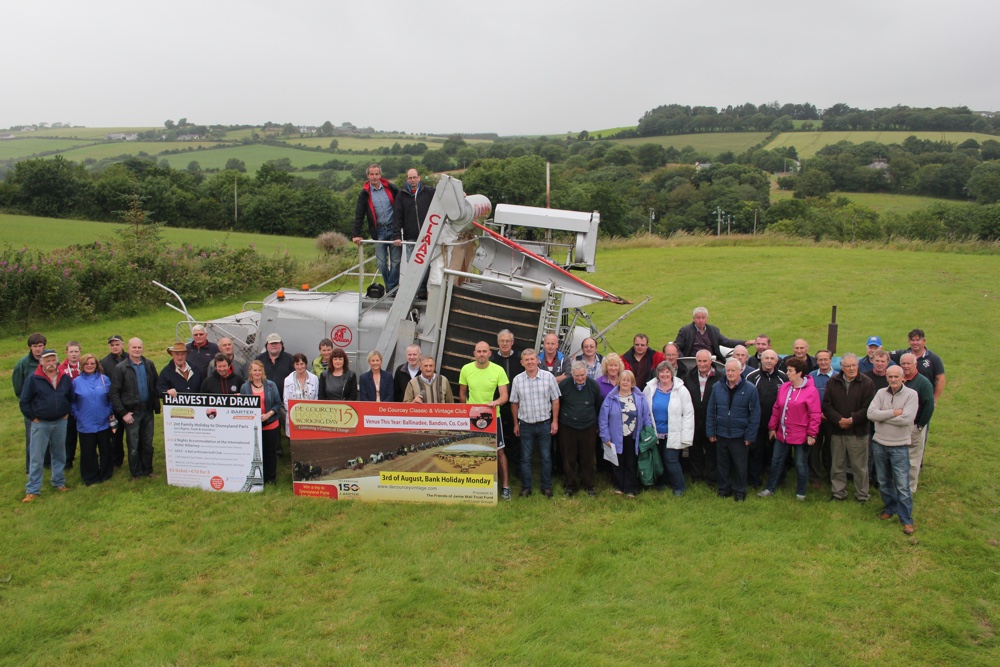 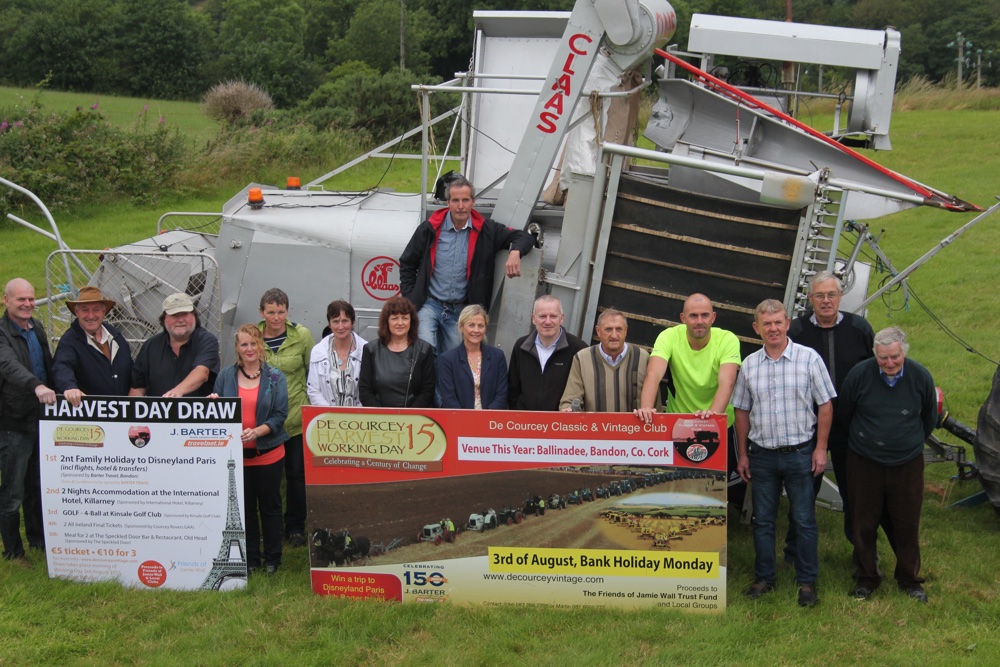 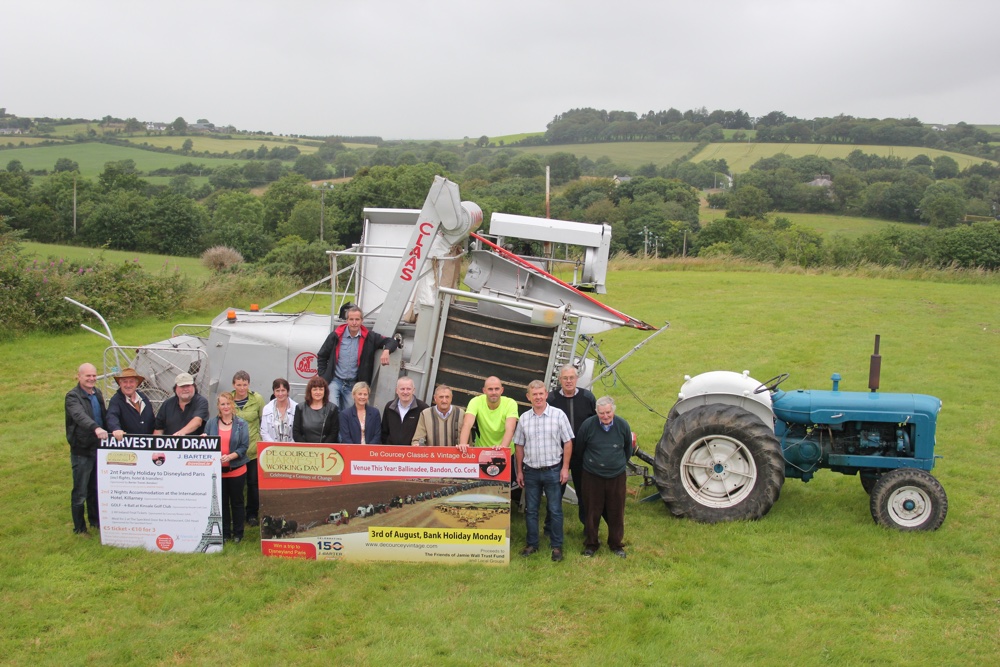 De Courcey Classic and vintage Club, building on the success of the Claas Centenary and the New Holland Basildon 50 celebrations are once again planning a major event for the 2015 August Bank Holiday Monday.

The theme for this year’s event will be “A century of Change”. As in previous years it will of course be a working day. Visitors will be able to see teams of horses working with implements and machinery from bygone farming days as well as the giant harvesters of today and everything in between.

Continuing with our commitment to supporting local causes, this year funds raised will once again go to several local groups in De Courcey’s parish but our main beneficiary will be the ‘Friends of Jamie Wall Trust Fund”.

Jamie Wall is a local young teacher who led a very active life and was much involved in the GAA, playing both hurling and football for Cork in Under 21’s and Minors. Unfortunately Jamie suffered a severe illness in 2014 which left him requiring a great deal of care. ‘The friends of Jamie Wall’ fund was set up to raise funds to support Jamie’s rehabilitation and aid in his goal of once again living an independent life.

The team at De Courcey’s look forward to fine weather on the August Bank Holiday Monday and a great day at our new site in Ballinadee to celebrate the ‘Century of Change’.

The De Courcey Classic and Vintage Club held a meeting on 1st Oct last to discuss the venue for our 2015 harvest day on the August bank Holiday Monday. The last four years has seen this event grow and grow in size.

The sponsor for 2014 was New Holland Agriculture and was once again a very successful day thanks in no small part to excellent weather with an attendance of over six thousand spectators.

In previous years the Harvest day has been hosted by Jim and Eileen O’Regan at Barrels Cross near Kinsale. Jim was the person who came up with the original idea for the unique vintage event and his family have pulled out all the stops to make sure the events ran flawlessly.

De Courcey Vintage Club is most grateful to the O’Regan family for the last four years and look forward to returning to Barrels Cross in the future.

2015 however will be different as a new site has been identified adjacent to Ballinadee village on land belonging to Paddy and Ann McCarthy. The new site will be an exciting challenge for the Club members with a new layout to be planned. The preparation for Monday 3rd Aug 2015 is already under way. 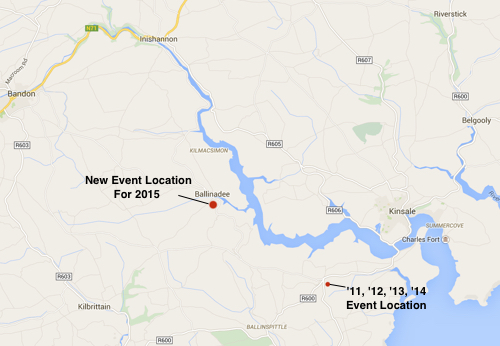 You can now rent or buy the Harvest Day 2014 video on Demand in HD! Watch it anywhere! On mobile, tablet, PC, laptop, Xbox, Apple TV and more.

The hard working team of the De Courcey Classic and Vintage club are just settling down and relaxing, after the excitement of yet another wonderful August Bank Holiday ‘Harvest Day’ at Barrel’s Cross, Kinsale.

Once again in 2014 crowds flocked to the farm of Jim and Eileen O’Regan at Coolyrahilly, Barrel’s Cross, Kinsale in County Cork. The many thousands who attended the event were not disappointed as the club committee and sponsors Mc & S Agri Sales Ltd, had prepared a very special day indeed. Of course with Mc & S on the team Courceys had to abandon their traditional red and white colours for the blue and yellow of Ford and New Holland.

The day started early with ploughs, harrows and tilling at midday followed by the teams of horses mowing, binding and drawing sheaves in the traditional harvest section. The vintage Claas, M.F’s Dronningberg, and Dania harvesters then started their own display.

A break in activity was called at 1PM for the opening ceremony. The crowd was addressed by John O’Neill (Club Chairman), Jim O’Regan (landowner) and John McCarthy of Mc&S. The official opening was then performed by Mr Andrew Watson C.E.O. of New Holland UK and Ireland, who had travelled to Ireland especially for the event.

Then it was down to work! A range of Ford and New Holland tractors from Keith Byran’s 1918 model F, to Jim O’Regan’s 2014 T7.260, gave an unforgettable display of ploughing. Donal McCarthy’s team of Clydesdale horses were joined by Fordson model F’s, N’s, Ford Nans, Majors and Dextas with a mixture of trailer and hydraulic ploughs. The thousand series up to the modern T6’s and T7’s with their huge reversible were all represented. There was plenty for the tractor enthusiast to enjoy and lots of cameras were out to capture the occasion. The final sequence in the ploughing area was a spectacular line up of the 24 participants in a single line spanning 96 years of progress.

As all this activity was taking place visitors were able take a break in the picnic area at the food village which occupied a central location in the 35 Acre field. Delicious food was served all day by local West Cork food outlets and many people returned several times to try out the different wares. The De Courcey tea tent was an especially busy place with many exhibitors and visitors having a cuppa and catching up with acquaintances for a chat.

In tune with the harvest theme, there was an impressive display of various milling machines from horse operated threshing machines to engine and tractor driven mills. Raymond White from Ballinspittle was kept busy all day demonstrating how the hand operated kern stones produced flour from wheat.

A fine display of vintage cars, trucks and tractors was on site. The tractors were of course dominated by the blue of the Fords. Many early Fordsons were also present. New Holland had a full range of modern machines at the event and the merchandise shop did tremendous business out all day.

After the final harvesting displays completed the raffle was held. Prizes included three months use of a New Holland Tractor, a weekend break and a New Holland gift pack. Mr Andrew Watson was then called to cut a specially commissioned cake commemorating 50 years of tractor production at the Basildon UK plant.

De Courcey Classic and Vintage Club would like to thank the members, sponsors, landowner, local groups and individuals and the many people who contributed in all sorts of ways for their support in 2014.

The proceeds from this year’s event will be donated to Marymount Hospice, Ballinspittle and Ballinadee primary schools and to Courcey Rovers GAA underage teams. 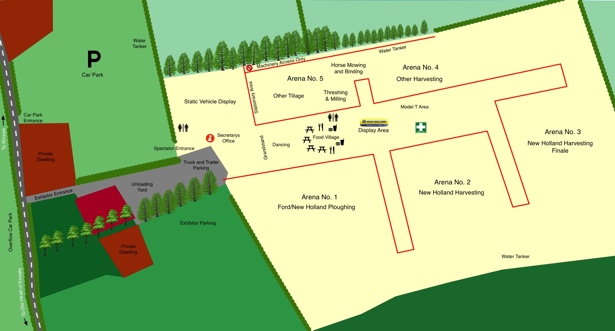 As per last year, there will be no trade stands at this years event. 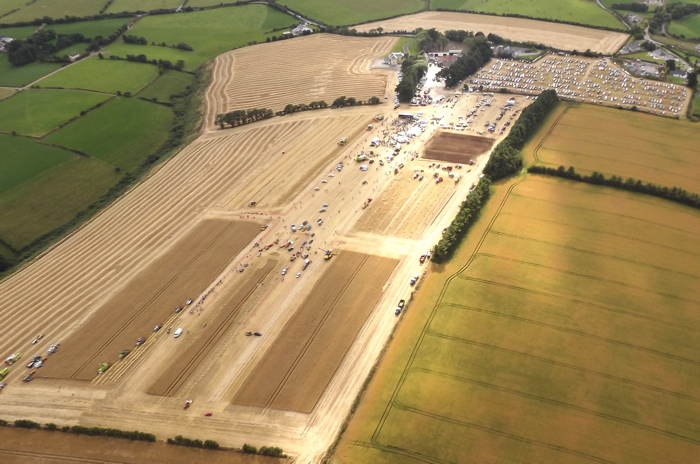 With well over three thousand people of all ages in attendance, this year’s harvest day was the biggest yet to be hosted by De Courcey classic and vintage Club with the assistance of our sponsor Claas farm machinery who are celebrating 100 years in business.

Our charities this year;

The event featured three separate areas of winter barley being cut in turn by a variety of combines, reaper and binders and horse drawn equipment.

A tillage area, being worked with vintage farm machinery.

Claas machines. 1950,s trailed combines, the first self-propelled models, machines from the 60’s 70’s and up to 2012 models on tracks. 15 Claas machines from all over the country attended from even as far away as Ballymena, Co Antrim.

One of the highlights of the afternoon was an auction of a number of collectors’ items. Available were two Claas Lexion combine harvester models specially commissioned for the day and a special book signed by Helmut Claas, the man responsible for growing Claas from the small family business in the 1940’s to the multi-national that it is today.

The models both made several hundred euros but the book went for several thousand.

The Club was delighted to have the C.E.O. of Claas UK and Ireland Mr Trevor Tyrrell at the event to perform the official opening. The Club would like to thank the many, many people who worked so hard to make this memorable event possible.